Sarah Deer is a University Distinguished Professor of women, gender and sexuality studies and in the School of Public Affairs and Administration at the University of Kansas. She was a MacArthur Fellow in 2014.

Deer’s research focuses on the intersection of federal Indian law and victims’ rights, using indigenous feminist principles as a framework. She is an expert on tribal law and violence against Native women. Her first book is The Beginning and End of Rape: Confronting Sexual Violence in Native America (2015).

Deer specializes in victim rights and advocacy, and authored an Amnesty International report titled “Maze of Injustice: The failure to protect Indigenous women from sexual violence in the USA.” For years, she advocated for reform to the Violence Against Women Act (VAWA). Renewed in 2013, VAWA now allows tribes to press charges against non-tribe members who inflict violence against Native women while on tribal land.

Deer is a citizen of the Muscogee (Creek) Nation. 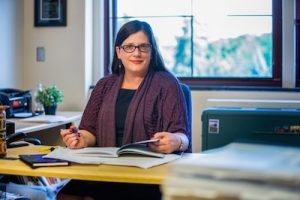