Stephon Alexander is a musician and professor of physics and astronomy at Brown University. Born in Trinidad, Alexander is a theoretical physicist, jazz saxophonist and author specializing in the interface between cosmology, particle physics and quantum gravity.

He was previously a professor at Dartmouth College, where he directed the Dartmouth EE Just Scholars program, which promotes excellence and innovation for young scientists from underrepresented backgrounds. He is the president of the National Society of Black Physicists.

Alexander has worked on a variety of projects throughout his career. In August 2014, he released a critically acclaimed album, Here Comes Now, in collaboration with electronic producer RIOUX. His 2016 book, The Jazz of Physics, explores the link between music and the structure of the universe. 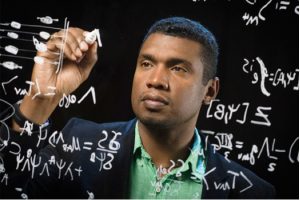 Heard on Closer to Truth: